Delaware Courts are currently in Phase Three of the reopening plan as of June 1, 2021. Learn more about the public reopening plan.

The Delaware Courts will be closed Friday June 18, 2021 in honor of Juneteenth. Justice of the Peace Courts 11 (New Castle County), 7 (Kent County), and 3 (Sussex County) will remain open. 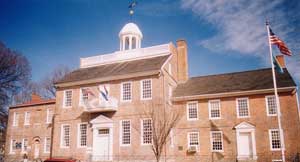 Superior Court's heritage can be traced back more than 345 years to December 6, 1669 when John Binckson and two others were tried for treason for leading an insurrection against colonists loyal to England in favor of the King of Sweden.

The red sash worn by High Courts of that time has been worn in the 21st century by the judges on ceremonial occasions. The law courts, which represent today's Superior Court jurisdiction, go back as far as 1831.

In 1951, the Court of Oyer and Terminer and the Court of General Sessions were abolished and their jurisdictions were combined in today's Superior Court.

The court's presiding judge was renamed president judge. There were five Superior Court judges in 1951; there are nineteen today. Sessions of Superior Court are held in each of the three counties at the county seat.

The Honorable E. Norman Veasey, former Chief Justice of Delaware, has described the Superior Court this way in his article, "The Drama of Judicial Branch Change in this Century", Delaware Lawyer, Vol. 17, No. 4, Winter 1999/2000.

"The Superior Court has always been the bellwether court of general jurisdiction in Delaware. Recent management innovations such as electronic filing, drug court, case management technology, arbitration, mediation, summary procedures, videoconferencing, jury reform and other advances have only added to its nationwide reputation for excellence.

Criminal cases, including death cases, crowd its docket, complicate its ability to move cases expeditiously and present the judges of that court with vexing challenges of meeting speedy trial and disposition guidelines consistent with quality adjudication.

The Court's jurisprudence and case management in civil litigation is exemplary, with particular emphasis in the late 1980s and 1990s in the businesslike handling of complex, national insurance coverage litigation, during which period the Court became a national innovator in electronic filing."

View a complete listing of all judges at: Superior Court Judges from 1831.

Superior Court's heritage can be traced back more than 345 years to December 6, 1669.

The red sash worn by the High Courts in the 17th century has been worn in the 21st century by the judges on ceremonial occasions.

A court designated as a Superior Court first appeared in the Constitution of 1831.

Bailiffs once carried tipstaffs. One side of the pointed tip was white, to represent the presumption of innocence. The other side was red to represent a finding of guilt. Upon conviction, the tipstaff was turned so that the red side faced forward in the courtroom and while the defendant was being escorted to and from the courtroom.

Jurisdiction over capital cases was vested in the Court of Oyer and Terminer until 1951 when it was transferred to the Superior Court.

On October 6, 2003, Superior Court was the first state court in the nation to require statewide electronic filing of certain categories of civil cases.

On July 28, 2000, Superior Court was the first state court to adopt a rule allowing briefs and appendices to be filed on CD-ROM.

In 1999, Superior Court began to use its Wilmington, Delaware eCourtroom, purported to be the nation's first actively used eCourtroom.

Begun in 1994, Superior Court had the first statewide Drug Court in the nation.