Delaware Courts have returned to Phase Two of the reopening plan as of November 16, 2020. Learn more about the public reopening plan. 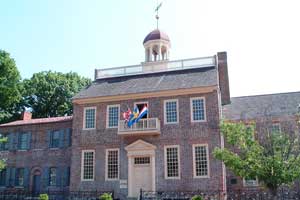 The Superior Court is one of the oldest and busiest trial courts in Delaware. At the beginning of the twentieth century and for fifty-one years thereafter, the five judges who constituted the court were, with the chancellor, also judges of the Supreme Court. A constitutional amendment adopted in 1951 created a "separate" Supreme Court; thereafter the judges of the Superior Court were no longer members of that court, although individual judges still may sit on the Supreme Court by designation of the chief justice.

The Superior Court and its judges have retained important appellate functions, however. The court hears appeals from proceedings in the Family Court, the Court of Common Pleas and the Justice of the Peace Courts. In addition, the court hears appeals from the Industrial Accident Board and from other boards and authorities and reviews decisions of some forty-three boards and commissions governed by the Administrative Procedures Act. To the extent that Delaware has an intermediate court of appeals, it is surely the Superior Court. The Superior Court and its judges thus do double duty: first, in the trial of civil and criminal cases (under a constitutional grant of general jurisdiction) and, second, as appellate reviewers of rulings by lower courts and administrative agencies. It makes for a busy judicial life.

The serpentine path by which Superior Court acquired its current trial jurisdiction goes back over two hundred years. Jurisdiction of civil cases at law and criminal cases was apportioned among a number of courts by the Constitution of 1792. A court designated as a "Superior Court" first appeared in the Constitution of 1831. This new article on the judiciary was drafted primarily by John M. Clayton, among the most eminent of Delaware lawyers. Admitted to the bar in 1819, he practiced law in Delaware and was elected to the United States Senate in 1829. In 1848 he was appointed secretary of state by President Zachary Taylor and negotiated the Clayton-Bulwar Treaty with Great Britain. He later became the second chief justice of the Superior Court, succeeding his cousin Thomas.

Under the 1831 constitution, the court was given "jurisdiction of all causes of a civil nature, real, personal and mixed at common law and all other jurisdiction and powers vested by the laws of this state in the Supreme Court or the Court of Common Pleas." The latter two courts were abolished.

In 1951, extensive amendments of the 1897 Constitution established a three-member Supreme Court with appellate review as its primary function. Thereafter, the title of "chief justice" no longer applied to a trial judge and the new head of the Superior Court was designated "president judge." The Courts of Oyer and Terminer and of General Sessions were abolished and their functions were incorporated into the Superior Court.

These fundamental changes were dramatized on May 9, 1951 when they became effective. Chief Deputy Attorney General Vincent A. Theisen moved Superior Court Associate Judges Caleb R. Layton III and Daniel L. Herrmann that "all indictments, proceedings and matters of a criminal nature pending in the former courts and all books, records, and papers of [those] former courts be transferred to the Superior Court." With approval of that motion, Delaware's ancient Courts of Oyer and Terminer and General Sessions passed into history.

The Superior Court later acquired additional jurisdiction from yet another court. From colonial times until 1970, the Orphans' Court had exercised jurisdiction over the estates of minors and guardians' accounts, intestate real estate, accounts of executors and administrators, and adoptions and termination of parental rights. In 1970 that court was abolished and its jurisdiction was divided between the Superior Court and the Court of Chancery.

Subject to certain statutory and equitable exceptions, the Superior Court now has general jurisdiction over all civil and criminal cases.

In addition to its trial and appellate jurisdiction, the Superior Court has yet another regular and significant duty. The court and certain designated judges canvass the votes cast at general and special elections and make the official certifications of the results.

The Superior Court established by the 1897 constitution had a chief justice, a resident judge in each county and one at large, all to serve "during good behavior." In spite of continually increasing caseloads, the number of judges was not increased for sixty years. Beginning in 1961, however, the number of judges has been increased frequently (usually by increments of two) to the present number of [nineteen]. By tradition, all the judges in the Superior Court spend some time attending matters in each of the counties.

A major step forward in reorganizing the procedures of Superior Court was the adoption in 1947 of new Rules of Civil Procedure modeled on the federal rules. The court abolished common law pleading, generally considered a substantial impediment to the expeditious and fair disposition of cases on their merits. Swept away in one stroke were all of the bewildering array of writs and other arcane procedures. In their place were one form of action and a uniform process for moving through pre-trial proceedings to trial. The civil rules have been amended from time to time to keep them essentially the same as the federal rules.

In 1952 the court adopted new rules for procedure in criminal cases that, in turn, were superseded in 1992 by the present rules.

Prior to the 1951 judicial reorganization, Supreme Court appellate jurisdiction was rarely invoked; on average there were about seven appeals per year. Thus decisions of the Superior Court, particularly in civil cases, often established Delaware law. In the absence of an appeal that law became final and accepted as binding authority. Many such rulings were published in the official Delaware Reports and in the Atlantic Reporter. Given the public interest in having the law "settled" (as well as right), some Superior Court opinions published a half-century ago and more are still valid Delaware law.

Since the Superior Court enjoyed broad jurisdiction, its decisions established the law in areas as varied as contracts, negligence, agency and partnership, property and commercial law, among others. The Court of General Sessions and the Court of Oyer and Terminer heard noncapital and capital criminal cases, respectively.

In 1951 there were only five Superior Court judges. By today's standards the caseload was light, but the judges retained extraordinary executive responsibilities. For example, they exercised direct oversight of the county jails until the state Board of Corrections was created by the General Assembly in 1956. The judges also appointed members of the Delaware Commission for the Blind until 1970. The resident judges of the court in each county appointed the board of trustees of each school district within the county until those positions became elective. Even thereafter the resident judge in New Castle County continued to hold appointive responsibility for some school boards until 1969. All such executive duties have now ended.

In the four decades since the creation of a separate Supreme Court, the Superior Court has continued to determine the civil law in certain important respects. In one important area, for example, because of the general rule against appeal from interlocutory decisions, interpretation of the Rules of Civil Procedure, especially those concerning pre-trial discovery, has been determined almost entirely by the Superior Court.

The court has over time modified its approach to technical aspects of pleading, tending more to brush aside technical deficiencies. Even when the court has been limited by precedent, it has not hesitated to criticize what seemed to be an unduly technical or unfair construction of law. Finally, the Superior Court has continued to contribute to the development of the law as a result of its appellate review of an ever-increasing number of administrative agencies.

Every case is serious and important to the parties and to the court. In addition, there is often a special public interest in the outcome of a case. A capital case, however, for obvious reasons, has a significance beyond all others to the parties and the public. Much more than money or liberty is at stake.

Jurisdiction over capital cases was vested in the Court of Oyer and Terminer until 1951 when it was transferred to the Superior Court. The trial of a capital case had several unique practices which survived until about mid-century. One such practice was a unique colloquy at the arraignment on the day of trial:

[Defendant's name], please stand. You stand indicted by the grand inquest of the State of Delaware and the body of [names the] County of a felony, that of first degree murder, committed in the following manner: [reads complete indictment]. How say you, [name of defendant], are you guilty in manner and form as you stand indicted, or not guilty?

PROTHONOTARY: How will you be tried?

DEFENDANT: By God and my country.

Another such practice included a traditional escort of the defendant to and from the courtroom by bailiffs carrying tipstaffs. One side of the pointed tip was white, representing the presumption of innocence. The white tip faced forward throughout the proceedings. The other side was red to represent a finding of guilt. Upon a conviction, the tipstaff was turned so that the red side faced forward while in the courtroom and while the defendant was being escorted to and from it. The Superior Court Courtroom Number 1 in the Kent County Courthouse retains today on both sides of the dock the wooden tipstaffs once carried by the bailiffs.

Under Article IV of the Delaware Constitution as amended in 1951, a capital felony could not be tried without three Superior Court judges presiding. Scheduling a case for trial under that requirement in a five-judge court created such practical difficulties that the constitutional provision was repealed in 1957.

Looking, of necessity, to the future, the court has adopted the Trial Court Performance Standards recommended by the National Center for State Courts and the Bureau of Justice Assistance for strategic planning purposes. The court has also adapted to today's demands by implementing American Bar Association standards relating to case and jury management, by expanding alternative dispute resolution methods and by using computers and other modern technologies to facilitate the administration of justice.

A prime example of the court's use of technologies that has attracted national interest is the Complex Litigation Automated Docket (CLAD). CLAD uses computer networking through digital telephone systems to allow the electronic filing and serving of documents in certain complex civil cases. Public access to the docket is enhanced because it is available twenty-four hours a day via personal computer with a modem. CLAD has provided a cost-effective alternative to the time-consuming, expensive tasks associated with managing voluminous documents.

For many years, a strong collegiality has existed among the judges who have served the court. That bond, which may be unique among Delaware courts, continues to this day. Judges who currently sit on the court cherish the firm tradition of congeniality begun under their predecessors. Based on more than friendship, it is a collaboration that furthers the common missions of doing justice and serving the needs of the court. To that end, judges share their experience and knowledge of precedent, problems and cases with each other.

Visiting judges and lawyers from other states have been quick to compliment the quality of the administration of justice in Superior Court and to admire the harmony they find. After witnessing the collegiality of the court firsthand in 1992, Professor Ernest C. Friesen, the first dean of the National Judicial College and a founder of modern court administration, said: "If I were to be a judge I would want to be one in Delaware."